How I became the famous GTA for GBA programmer 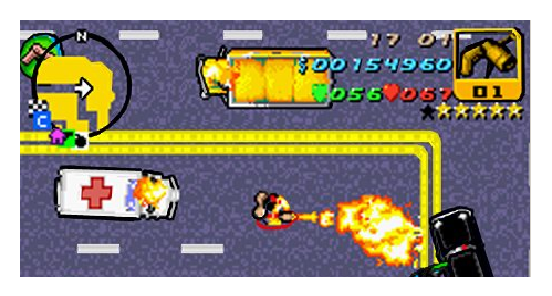 Yesterday I suddenly got a DM on Twitter from Brian Provinciano, asking if I was the Hugo Smits from Grand Theft Auto on GameBoy Advance. I thought it would be a funny story to post here, so here we go!

Be prepared to be gravely disappointed:

In that case, I’m actually the Hugo you are looking for! After all those years that game still haunts me, haha! Back in the day I was a very active homebrew coder. Ever since I got my own version of pong to work on a GameBoy Classic back in 1998, I knew I was going to make Nintendo handheld games for the rest of my life!

Back then developers where still a bit naïve and a Dutch Studio did an interview with the biggest Dutch game magazine. They where naïve in the sense the actually put their phone number in there as well. So this nine year old called them up. Apparently they thought I was cute and they let me hang out with them.

They worked mostly on licensed stuff; Xmen/Marvel, things for Konami,etc. A lot of stuff was collaborated with Vicarious Visions and other famous GBA studios, I believe even Crawfish at some point in time.

At the same time I also started to know and befriend lots of people through homebrew. So I actually knew a few people at Crawfish.

Next to my programming work, I also helped ran one of the largest Nintendo videogame sites in the Benelux (mainly gbaparty.nl and cubeparty.nl) At the height we had over 50.000 active members and we organized conventions where over 2000 people would show up and play competition (Mario Kart, Smash Bros). Eventually we even did the game awards for the Dutch MTV.

Around this time the rumors of Grand Theft Auto for GameBoy Advance where reaching their heights as well. More and more sites wrote about it, but nobody had actually heard any confirmation that the game was really in development, nobody had seen anything.

Eventually Crawfish went bankrupt, which fueled the question of what happened to GTA even more.

I tried to figure it out, talked to all my contacts in the dev/homebrew scene. Turning up with nothing time after time. Until I finally found a programmer who worked on it (through my Crawfish contacts). He was pretty bitter over losing his job, and he thought about putting GTA up in his portfolio (to increase changes on finding a new job).

I talked to him and convinced him to give me a bunch of screenshots of the project, which I would put up on my website in a huge reveal article. This was pretty much the biggest scoop I ever discovered.

Because with all these huge gaming events going on, I did not have the time to actually write articles anymore. So I gave it to the news team. They decided that because there wasn’t a real verifiable source (except for a unknown guy claiming to be the programmer) to write also about my story finding it. Because our readers knew that I was actively involved in development of titles, did homebrew and was in contact with Nintendo because of the events, this would give the article some credibility.

The article (just like the complete site) was in Dutch. Not many people could read it. One of the bigger German sites saw the article and of course took it over for their site.  However their translation wasn’t the best. I’m not sure what happened, maybe the writer just scanned over the Dutch article, saw my name and the word ‘programmeur’ figured it had to mean programmer. One way or another, I ended up in the German article as the ‘lead programmer who released these screenshots’. All other international sites took over the article from the German site, without any fact checking, they all took over that I was the programmer.

Because it was such a highly sought after game and this was the only evidence it was real, almost every gaming site posted the article in a matter days.

And that’s how I became the famous GTA programmer without actually writing a single line of code!
Gepost door Hugo op 05:51