Yesterday the Dutch Game Awards where held (http://www.dutchgameawards.nl).
During a fancy dinner they gave away the awards, and Flipper won the "Best Mobile / Handheld Game 2010" award! awesome!

I had a great time, drinking (free beers, mind you!) and laughing with friends :)


here is a picture of the award : 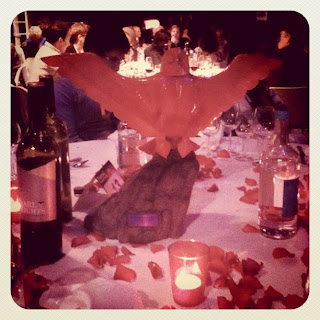 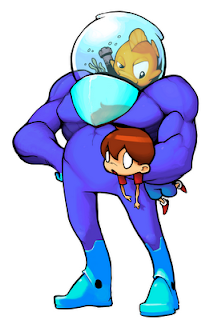 I'm very excited to announce my new game today; Flipper 2. It's going to be a 2D platform game that can be controlled with only one button. It's coming to DSi-Ware and it will be like nothing else.

The game is controlled by one button. Every screen Flipper can preform one action (jump,shoot) by pressing that button. And you need to figure out how to get Flipper to the other side safely with that action (avoiding all the traps and enemies).

The levels are pretty random in what the player needs to do, so it's a bit like wario-ware. You have to quickly find out what to do and do it before you die.

It's very action-orientated. With a lot of explosions and score-points flying everywhere.

The big focus is on the main-character of this game; Flipper. There are many, MANY actions and animations that he will show off. All goofy,funny or awesome. I have some great artists working on this; Paul Veer (who also did graphics for Flipper 1) and Roy Nathan de Groot (who did this amazing concept piece).

I tried to keep it like a comic/cartoon thing from the 90s, the humor is also in this style. Basically Paul made animations, and If it made me laugh we kept them :)

Especially the dying animations are funny as hell.

So to sum it up; If you like 90s cartoons and videogames. You like this.
Gepost door Hugo op 02:17 2 opmerkingen: 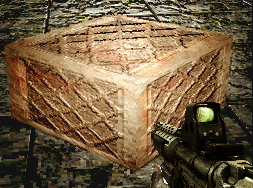 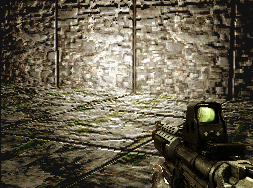 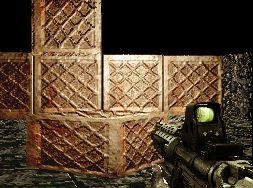 This was btw not the main-project, that one is still going strong. Expect some new material soon!
Gepost door Hugo op 10:42 1 opmerking:

3DS and what I think

Many people have asked me what I think of the new Nintendo 3DS. I have mixed feelings, the machine it self looks pretty slick. The analog thumb stick seems a welcome addition to the original d-pad.


(BTW I only know what I've read/viewed online, I did not actually play or see a 3DS in real life).

The demos and games presented at E3 seem pretty cool. It's for the first time I'm excited about all games in the first line-up. The graphics of some of them seem like a huge step forward.

It's also at this point I have some troubles. It looks good, but what does it bring to the table ? I want to play those names mainly because I know the brands. I know Metal Gear, it is cool.

But it doesn't really do anything different than what I'm used to. Is that needed ? I don't know.

Don't get me wrong, I'm excited. I cannot wait to have a 3DS in my hands. I will definitely buy it.

I'm just wondering if they 3D effect will make a big impact. Sure it will be cool the first week, but after the 'new' effect wears off, will it improve gameplay or my experience ?

How will this stack up for developers. How about indie developers like me ? Will we be able to make games ? Or make games that we want to make. For example, will a 2D platform game still be successful ? Because it's hard to image somebody playing a 2D game on a system that he bought especially for the 3D effect.

I know there will be 3DS-Ware, but how will that market look. It's hard to imagine that little studios will be able to create something on the same level of detail as the games that we seen on E3.

It's going to be a wild ride for developers, that's for sure....
Gepost door Hugo op 10:38 Geen opmerkingen:

it's finally out in Europe!


Flipper has landed in the EU Dsi-Ware store. I was a real kick to buy & download my own game today! awesome stuff!

Thanks everybody for your support!
Gepost door Hugo op 04:41 Geen opmerkingen:

Hey everbody! because of the release in EU, I'm searching for EU nintendo (fan)websites that would like to receive a free copy of Flipper (with box!).

So.. who knows some cool EU sites (Germany, France, Spain,etc) that I can contact ?

Flipper comes to Europe on 23 April!

Utrecht, The Netherlands – April 12th, 2010 – Xform and Goodbye Galaxy Games are excited to announce that their game Flipper for Nintendo DSiWare™ will reach the European shores on April 23rd 2010. The game has been developed exclusively for Nintendo DSiWare.

The voxel engine technology allows you to change the environment with some cool power-ups. You can find power-ups that let you blast holes in the environment, build platforms, or restore parts you've previously destroyed. It's up to you to use the limited amount of power-ups wisely to complete each level.
Gepost door Hugo op 06:09 Geen opmerkingen:

Hey guys, here are the contest winners and runnerups! we really enjoyed all the photo's you guys send in.. awesome stuff! thanks!


the winners will be contacted by me to send in their address. 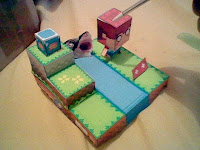 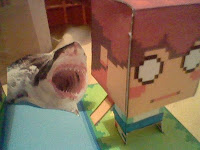 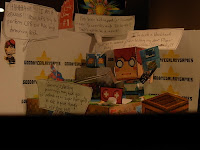 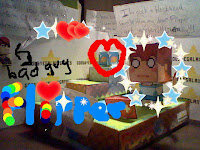 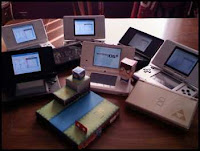 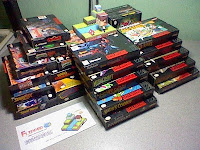 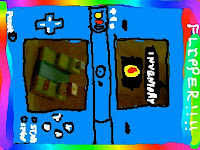 again thanks everyone for sending in the pictures!
Gepost door Hugo op 15:01 Geen opmerkingen:

We want to give you guys some more time to make the photos :

Flipper is doing great in the US!


Thanks everybody, thanks for the kind words and messages you guys send to me! thanks!

Nintendolife.com - 7
Personality and charm go a long way in digital download releases and luckily, Flipper has ample helpings of both 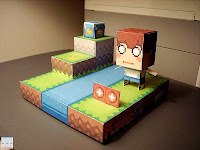 Bryan from http://www.paperfoldables.com made an awesome Flipper paper fold which you can download from our website. We thought Bryan did such an great job that we decided to use it in a contest!

What can you win ? 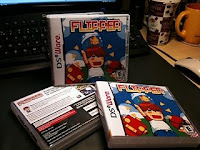 As if a free paper foldable Flipper stage isn’t cool enough on its own, we give away a free boxed version of Flipper. This box includes a 2000 Nintendo point card! So you can play Flipper for FREE and some other games too! Woohoo!

What you need to do ? it’s really simple :

The photo must include the paperfold, whatever else you put on the photo is up to your creative mind (photoshopped images are accepted!).

DO NOT SEND US YOUR ADDRESS, UNTILL WE ASK YOU TO!

You can send it to : contest@flippergame.com

Until When can you send in photos ?

By sending us the photo you agree that Goodbye Galaxy Games can use it for
promotional use.

The winners will be picked by Goodbye Galaxy Games. Decisions of Goodbye
Galaxy Games are final. Prizes are non-transferable. If Goodbye Galaxy Games
is unable to contact the winner or if the winner fails to claim or accept his/her
prize within 10 calendar days of notification, the prize is forfeited and a substitute winner may be chosen.
Gepost door Hugo op 07:47 Geen opmerkingen:

Awesome news; Edge magazine did a preview of Flipper in their latest issue (march).

Christian Donlan wrote “With smart touch screen controls and four different themed worlds to explore - all riddled with bonuses - Flipper looks both clever and generously-built: a collision of rich colours and oddball technology that seems destined to charm.”

It’s finally time to give you guys a peak at the last world in flipper; the robot world! This world is quite different than the other worlds, because the enemies (very mean robots!) have other AI, they only move when you’re in their field of sight. So to dodge them you need totally different strategies than normally. 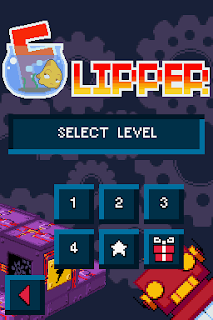 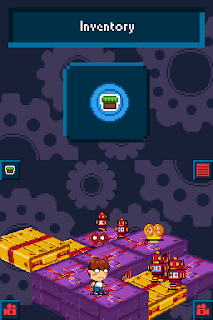 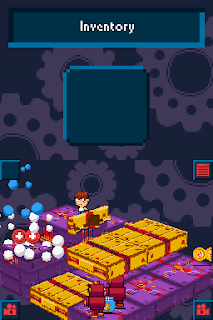 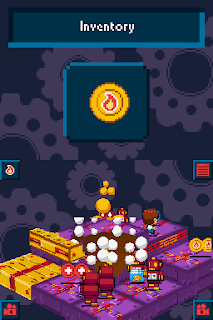 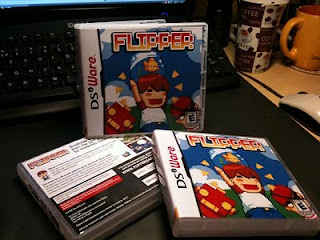 We made these boxes for the promotion of Flipper!

Are you a reviewer ? do you live in the USA and do you want to review Flipper… for FREE ?

Flipper(USA version) out on 22 February!

Below you can find the official press-release.

I’m really excited about this. Finally I can share my baby with the world :)

I’m also extremely busy with promotion-shizzle, so expect many updates in the next 2 weeks.
Gepost door Hugo op 23:56 Geen opmerkingen:

Utrecht, The Netherlands– February 8th, 2010– Xform and Goodbye Galaxy Games are excited to finally announce that their game Flipper for Nintendo DSiWare™ will see the light of day in North America on February 22nd 2010. The European release is scheduled for Q1 2010. The game has been developed exclusively for Nintendo DSiWare.

The voxel engine technology allows you to change the environment with some cool power-ups. You can find power-ups that let you blast holes in the environment, build platforms, or restore parts you've previously destroyed. It's up to you to use the limited amount of power-ups wisely to complete each level.

Flipper is a fun and challenging puzzle game that is suitable for all ages.

Xform is a leading independent developer and publisher of browser based 3d games. We create games for the world’s biggest publishers, advertising agencies and game portals and have an extensive portfolio of successful games. Since 2009, Xform also develops games for popular home consoles, handhelds and mobile devices. Xform was founded in 2004 and has its headquarters in Utrecht, The Netherlands. More information about Xform and its products may be found at www.xform.nl.

Goodbye Galaxy Games is a Dutch game development studio that develops awesome original home grown games! The studio is founded in early 2008 by Hugo Smits. We use our craftsmanship to create videogames that are fun, original, inventive and highly playable for both hardcore and casual players!

Quality ? Flipper has it!

Today is my birthday. And Nintendo decided to give me an awesome present. 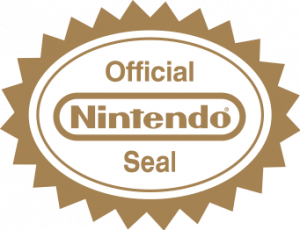 I’m so happy, very hard to describe. Although the development of Flipper was a lot of fun, it was also REALLY hard. I basically wrote the game in the night (during the day I went to school). And now it’s done, Flipper will reach the USA soon. And then you guys can finally play it :)

I will give more infomartion tomorrow, because I have to get back to my birthday party right now!
Gepost door Hugo op 09:21 1 opmerking: