Okay, I haven’t been posting as much as I wanted. But it has been very VERY busy. Basically I worked on the USA and EU version of Flipper. And hopefully (if everything goes right with the lotcheck) the USA version is available around xmas (but probably January).

As you may know there are a lot of technical rules for developing a console game, but there are also gameplay rules. I’m sure that when they created them it seems like a good thing, in fact if you read the rules they seem good. The problem is, they don’t always work for every game.

Flipper happens to be one of those games. It’s a puzzle game. It’s normal for the player to get trapped. However the rules say a player should never be trapped. And this is where my nightmare game design begins.

In flipper, there’s a powerup which lets you build blocks. You can build staircases and bridges with it. However, if you build it on top of the player. The player gets trapped. This is against the rules.

There are few options that one can take to solve this problem :

b.) Not being able to build blocks around the player. Which also suckes a lot because now there’s a invinsible boundary where you can’t build. And you need to move the player before you can. This is irritating. Besides that, it was cool to be able to lift the player up by building a block under him (this is different than building a block ON him).

c.) Let the player die instantly (well, after the dying animation). Which is still against the rules, but a little better then letting the player decide it’s over (and manually have to restart the level). However, it also doesn’t give you the change to free yourself (in case you have a destroy-powerup).

In the end I decided to go for C. I don’t wan’t to just pick a fight, but I feel this is too important for the fun of the game. I don’t want to kill the puzzles for something as stupid as this. 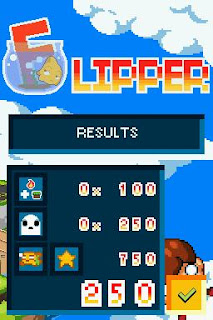 Just to get something visual in this post: here’s a look at the result screen. You get points for unused powerups (solving the puzzle with the least amount of powerups), you get points for trapping the enemies (letting them fall of the world), and you get 250 points for reaching Flipper and another 500 points for finding the golden star!
Gepost door Hugo op 03:49